The Passion show connects with the medieval tradition and the mysteries.

The Passion show connects with the medieval tradition and the mysteries represented inside the churches during Easter, showing scenes of Christ´s life, the apostles or the Virgin, and of the “tropus” (musical and textual ones additions) that adorned and enlarged the liturgical hymns and songs of the time. The tradition originated in Occitanie around the 10th century, although some historians trace the “tropus” (musical additions) back to Carolingian France in the 8th-9th century.

According to our knowledge, The Passion has always been represented in Catalan in Esparreguera, being one of the few areas which has resisted the continuous prohibitions and persecutions of our language.

Over time, representations evolved into an increasingly theatrical composition that went beyond mere reading of Scripture. Thus, the appearance of dialogues between the characters and the ever-increasing presence of profane texts and music has become commonplace. In the fourteenth century we can already find authentic stage shows that are also represented in streets and squares, with its deep roots and popular folk, Catalan will become the main language leaving Latin in detriment. It should be emphasized that, as far as we know, in Esparreguera, La Passió has always been performed in Catalan, being one of the few areas that has withstood the continuous prohibitions and persecutions of its language.

The increasing presence of profane elements and the growth of the popular character of the representations led to the Council of Trent (1545-1563) banning such performances inside the temples. This, however, strengthened the play considering that the organization and financing were handled by diverse trade unions. It is surely at this age and time that we should place La Passió d’Esparreguera in the list of Passions of the so-called shore of Llobregat, which was one of the most active areas of Passion events in Catalonia in the 17th and 18th century.

The intense period of  civil and ecclesiastical prohibitions banned The Passions from the 18th and 19th century, which leads to their disappearance before the 20th century. La Passió d’Esparreguera however, withstood these prohibitions and was able to maintain and modernize its traditional Passion.

We ought to place La Passió d’ Esparreguera among the so-called Passions of the so-called shore of Llobregat, one of the most active and with the highest concentration of Passion acts in modern Catalonia.

Unfortunately, Esparreguera has been the scene of several warlike conflicts throughout its history, which have led to the continuous destruction and looting of civil and ecclesiastical documents and files. For this reason, at this time (and pending future evidence) no documents have been recovered before 1875. Because of this, all oral sources and family traditions that have been passed down from parent to child are relevant. Numerous testimonies collected in the first half of the 20th Century date back to the representations of the Passion, staged in the Church Square, in the late eighteen century. There is even talk of a document that would mention the representations in Esparreguera as far back as 1588. But the truth is that even now a day we are still working on the search for witnesses, who are able to give us any information about our roots and traditions.

In the nineteenth century we experienced a great phenomenon which was the expansion of theatres as a specific building through Catalonia. It is at this moment that we find for the first time documented scripts of The Passion show, which had already been performed in the theatre of “ La Siempreviva “ in 1875 with texts written by Friar Anton de Sant Jeroni and music by the Monné family.

In the 20th century there was an outpouring of cultural, recreational and political societies in Esparreguera

In the 20th century, there was a real outpouring of cultural, recreational and political societies in Esparreguera. In 1882 the “Estrella Society” was created, from which others later appeared as “Porvenir Esparreguerense” or “La Alianza”. Thus, already in 1901, the Passion was simultaneously represented by two societies: “La Siempreviva” and “La Alianza” ( which was represented in the “Teatre Nou” ,later called “Teatre Modern d’Esparreguera” and which would be later known as “’L’ Estrella”. This duplicity however will be short-lived, as La Passió of “La Siempreviva” declined performing the act and would soon cease to be represented. For this reason, the society “La Alianza” dissolved in 1910, although the representations of  La Passió continued under the patronage of several individuals until 1915, the year in which the company “Foc Nou” was founded. In 1920 the society “Ateneu Nacionalista” was created, which in 1928 inaugurated its own theatre and began performing its own Passion, entering in direct competition with “L’Estrella”, which caused an economic crisis for both Passions that left the town without representations for six years. After this crisis, in 1935 and 1936, both “L’Estrella” and “L’Ateneu” restarted their performances with considerable success.

The outbreak of the Civil War forced the representations to end until 1940, when the Passion Board was created.

The outbreak of the Civil War forced a new cessation for the performances until 1940, when they reopened their performances at “La Estrella” theatre, in Catalan. At the end of the same year, the Patronat de la Passió was created, which was later absorbed in 1941, by “Educación y Descanso”, with the creation of  ‘la Junta Delegada de la Pasión’ , delegated Board of  La Passió, headed by the mayor at the time. In that same year the performances of  La Passió were definitively transferred to “L’ Ateneu” theatre, where it would be performed until 1968. This period saw the final masterpiece finished.

Because of its success The Passion representation had to be extended to ten and sometimes more for the avalanche of public that filled the theatre every year.

From 1941, the Passion of Esparreguera becomes a cultural and mass phenomenon, having to increase its number of performances up to 10 times.

In the early 1950´s, La Passió d’ Esparreguera saw the need to modernize and adopt a new script that replaced that one of Friar Anton de Sant Jeroni, originally written in 1772, and considered ancient for today. This task was entrusted to Mossèn Marçal Martínez, whose texts were written between 1952 and 1959. Shortly after, a new text was commissioned by Ramon Torruella, a sparring poet and man closely linked to  La Passió. Torruella, who had already been involved in arranging previous texts and creating some new scenes, introduced in 1959 a completely new, dramatic text that began to be performed in 1960.

Due to the great success of the performances of La Passió d’Esparreguera, “L’Ateneu” had become too small and the construction of the current Passion theatre began and was later inaguarated in 1969

Faced with the great success of the performances of  La Passió d’Esparreguera,  became too small to accommodate all the  public and in 1950 the construction of the new theatre began. It was more spacious and was adapted to the stage demands. In 1969 the current Passió theatre was inaugurated, and the show has been performed there ever since.

In the last century 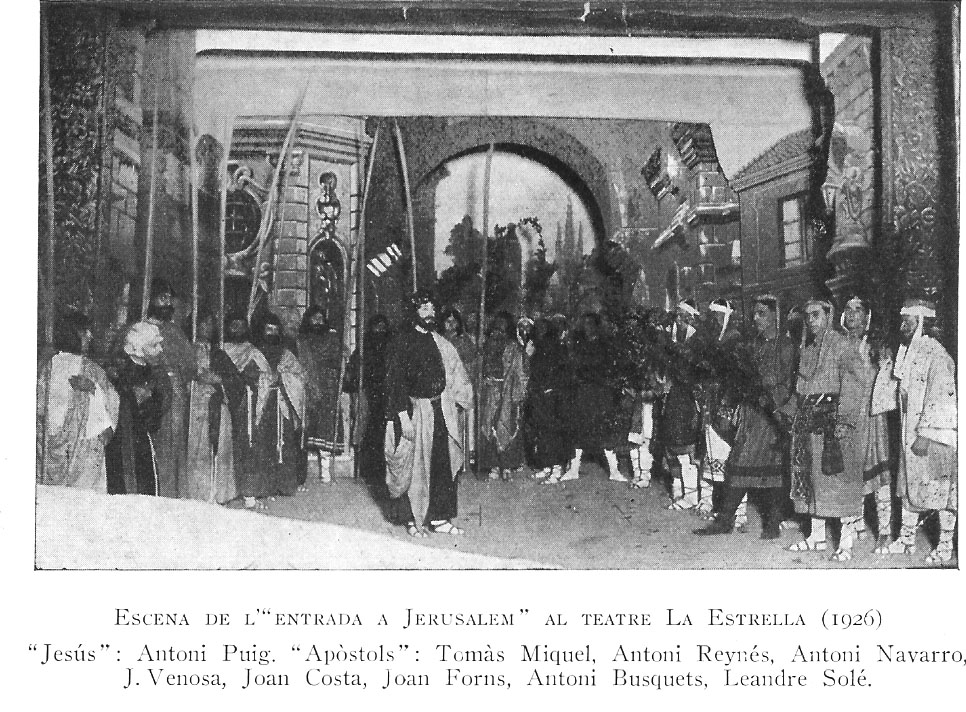 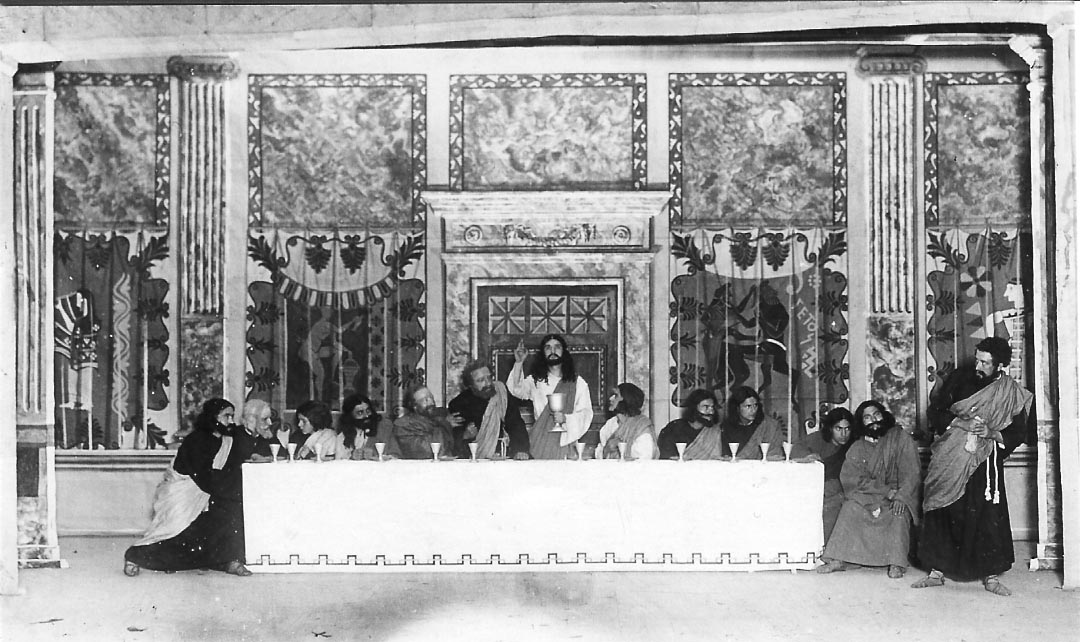 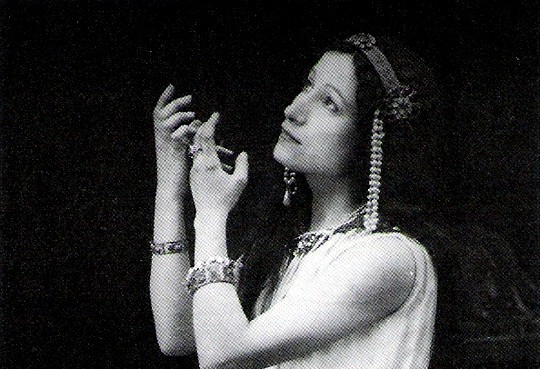 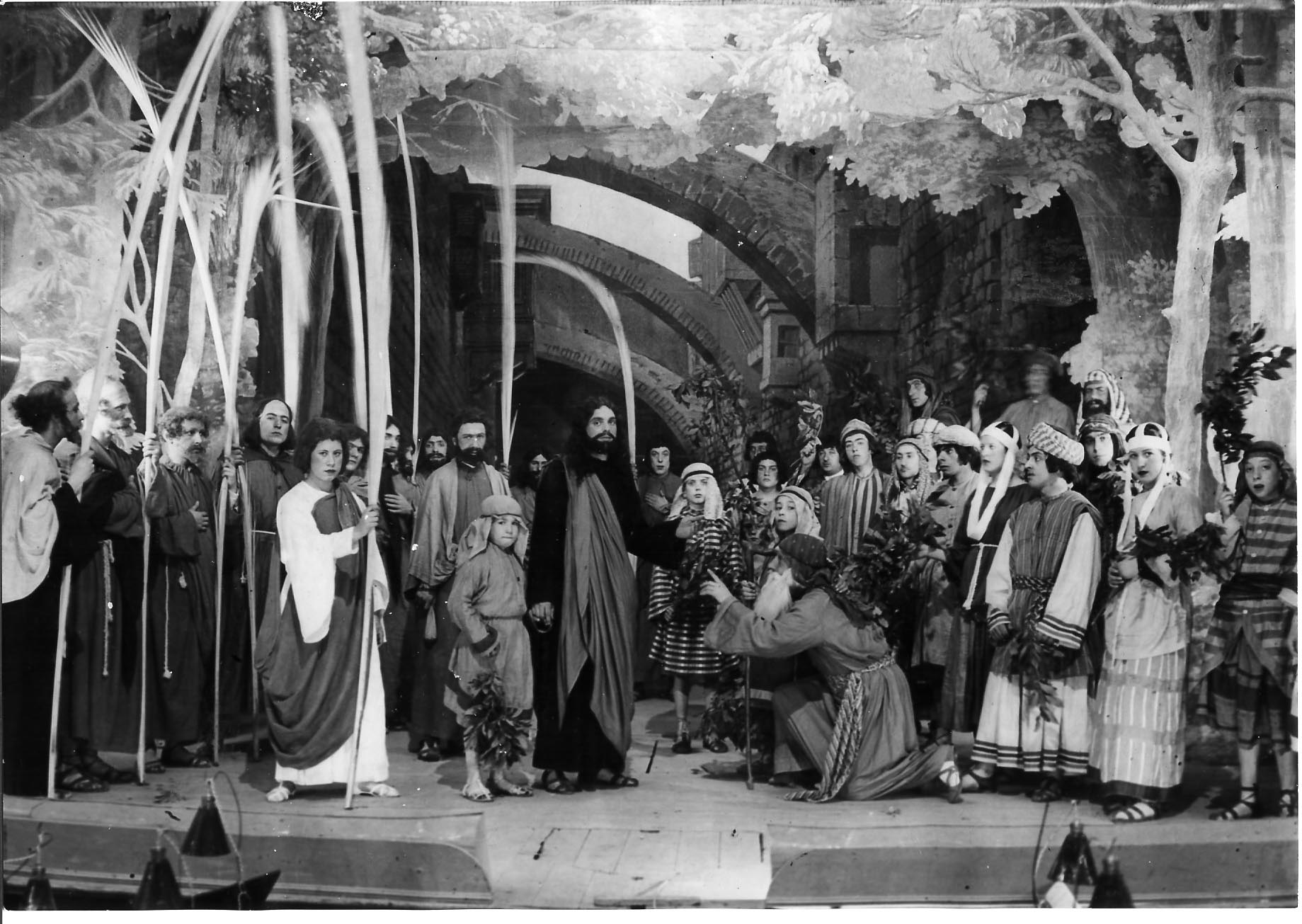 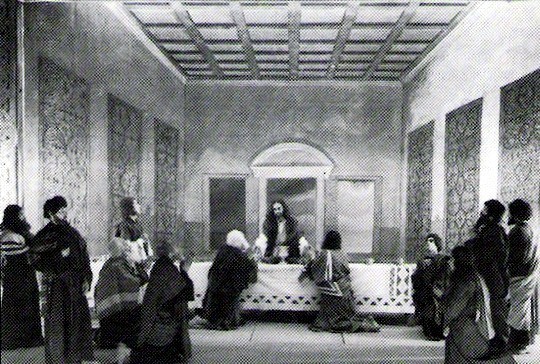 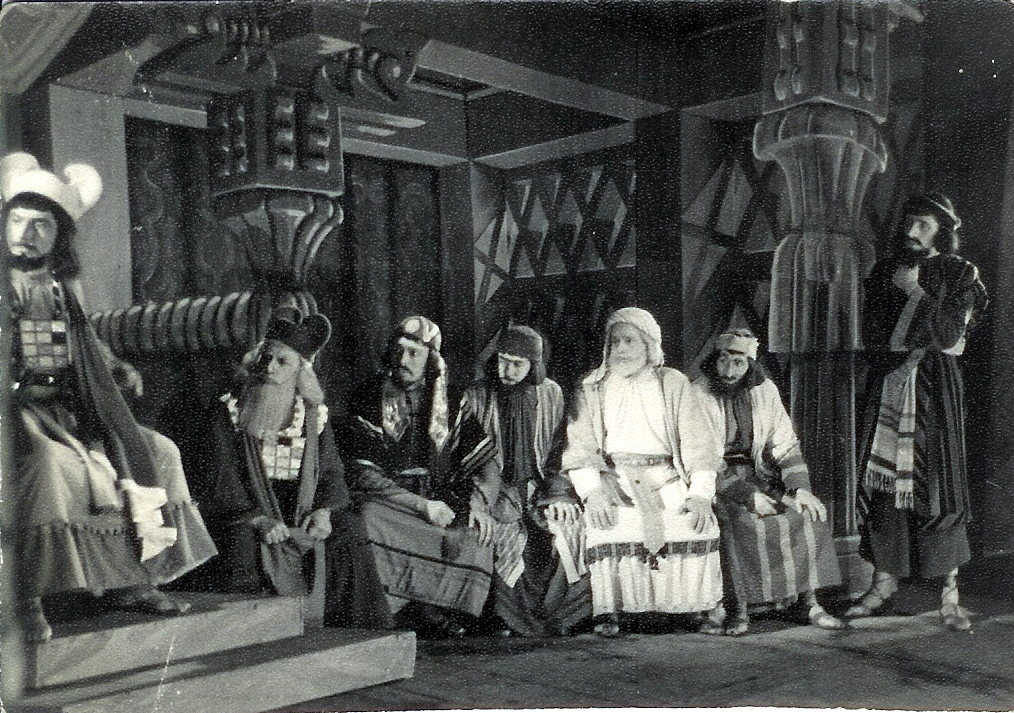 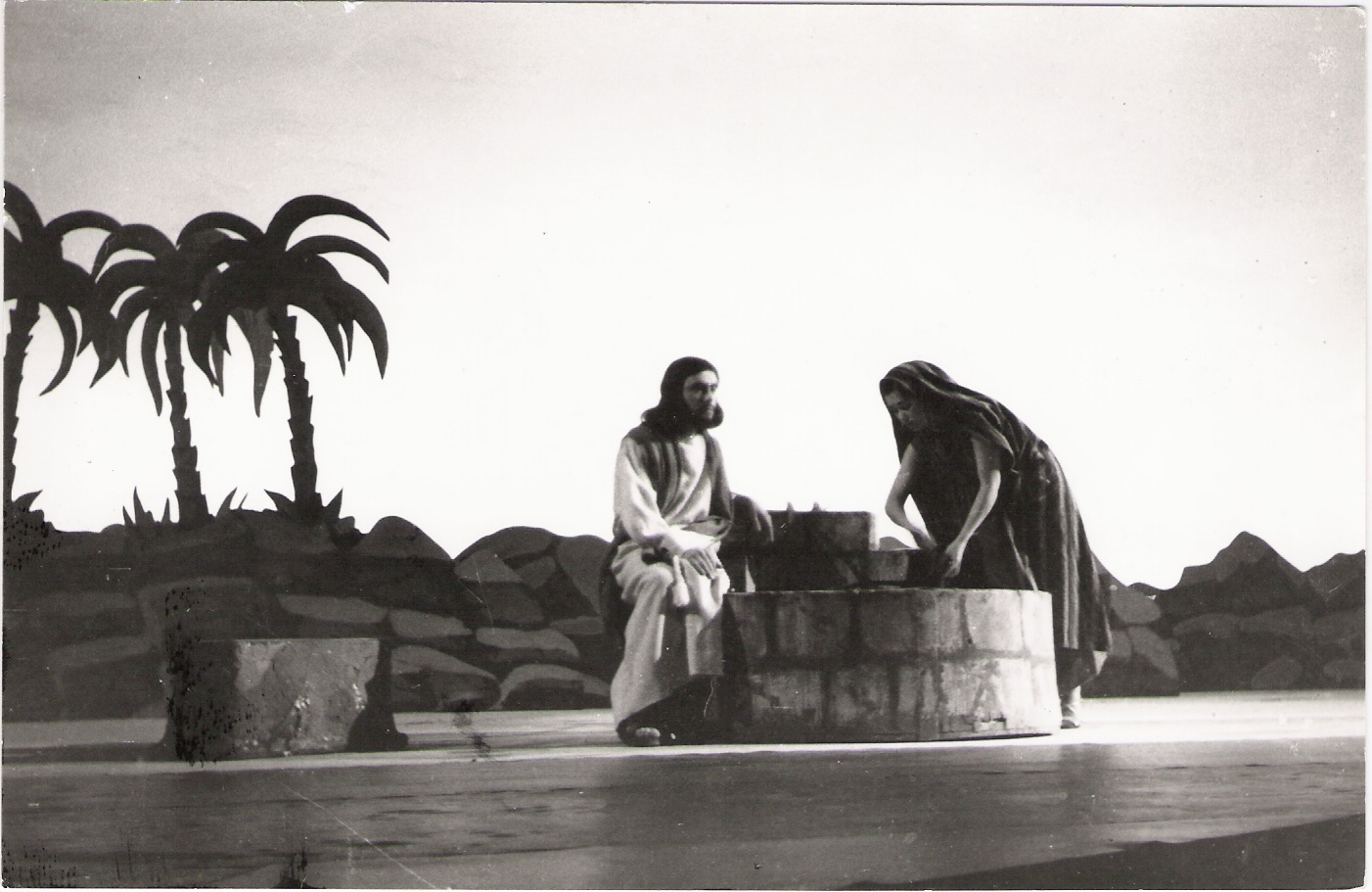 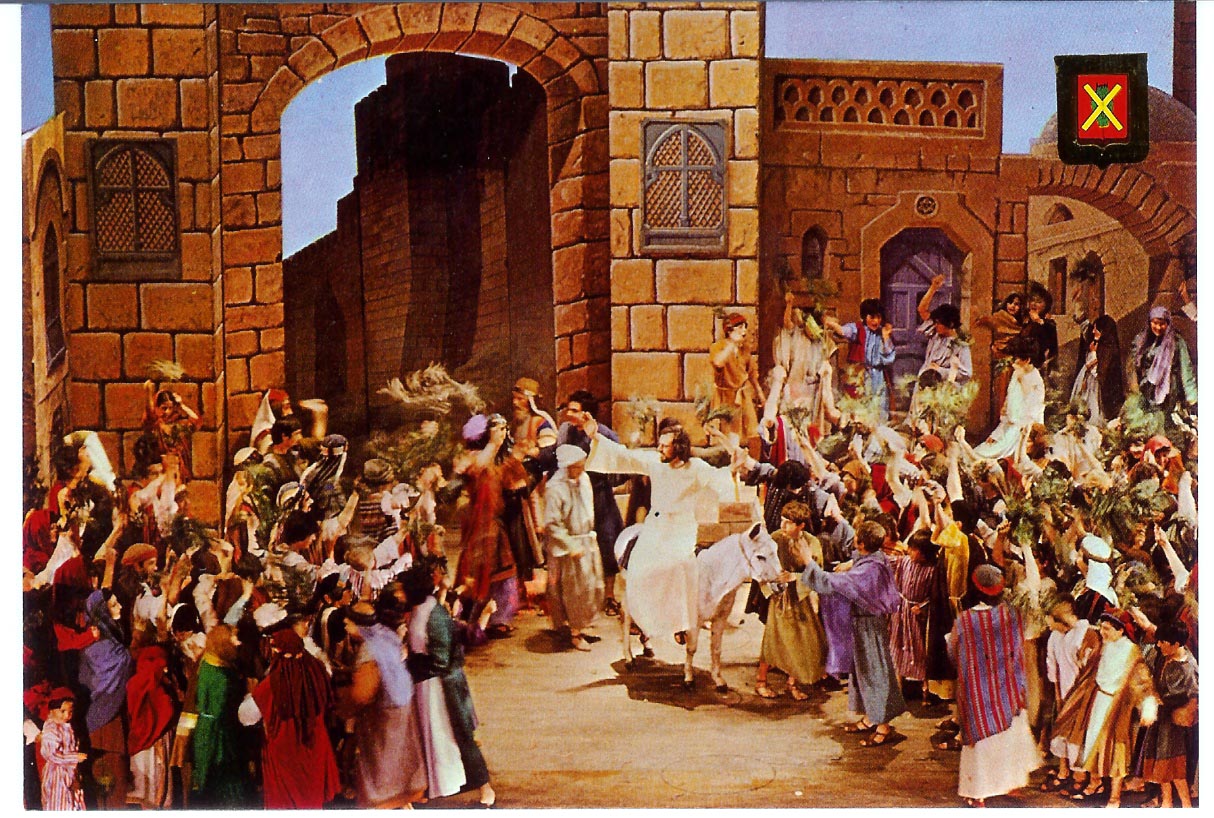 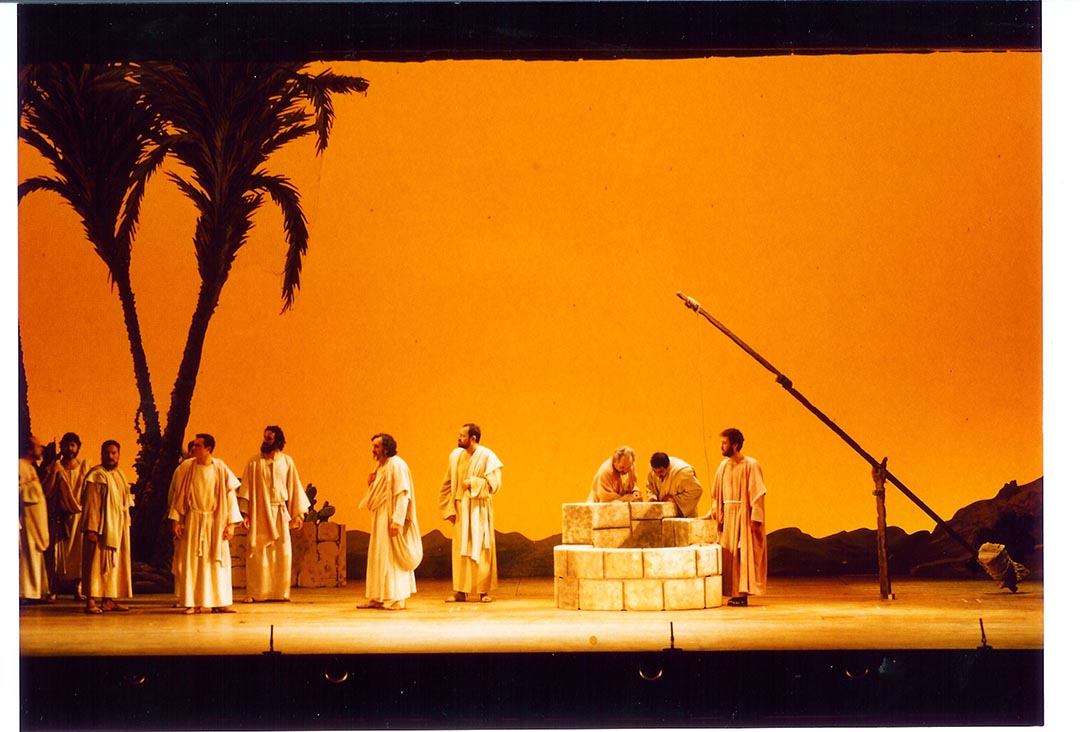 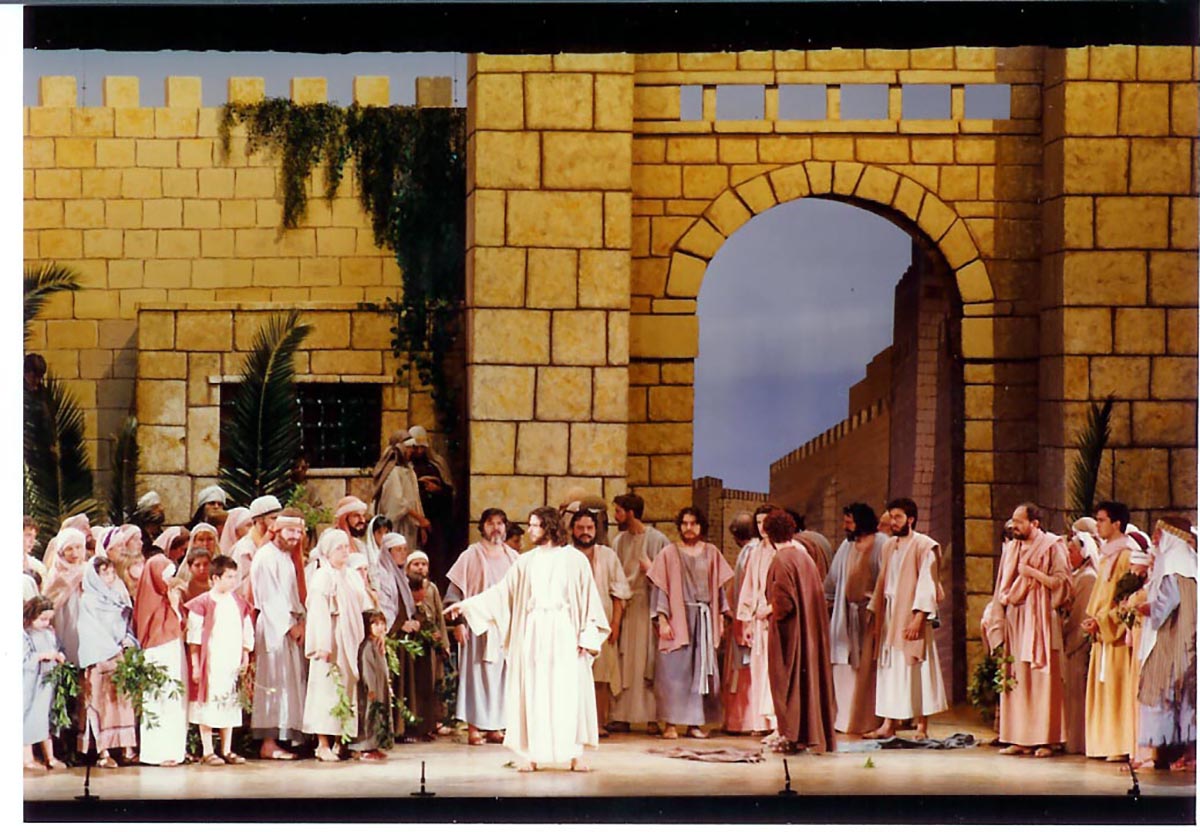 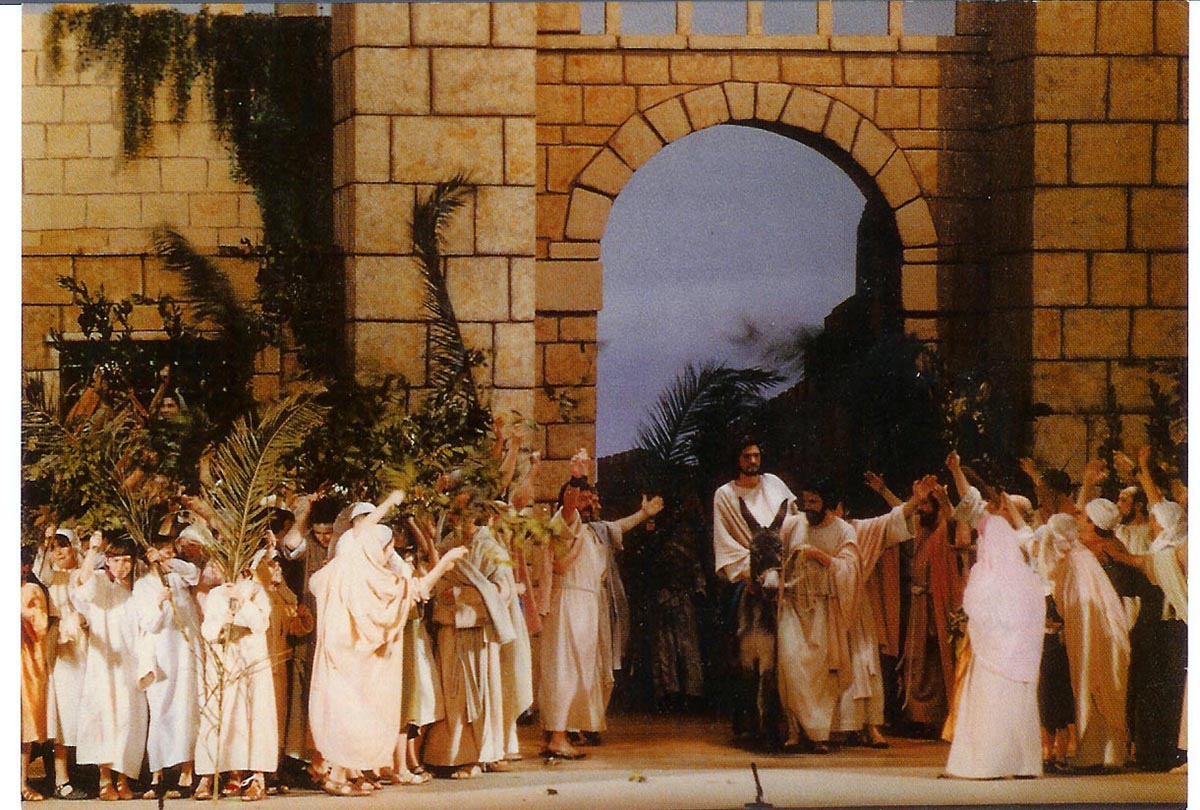 The Passion of Esparreguera
was declared of national interest in 1983. 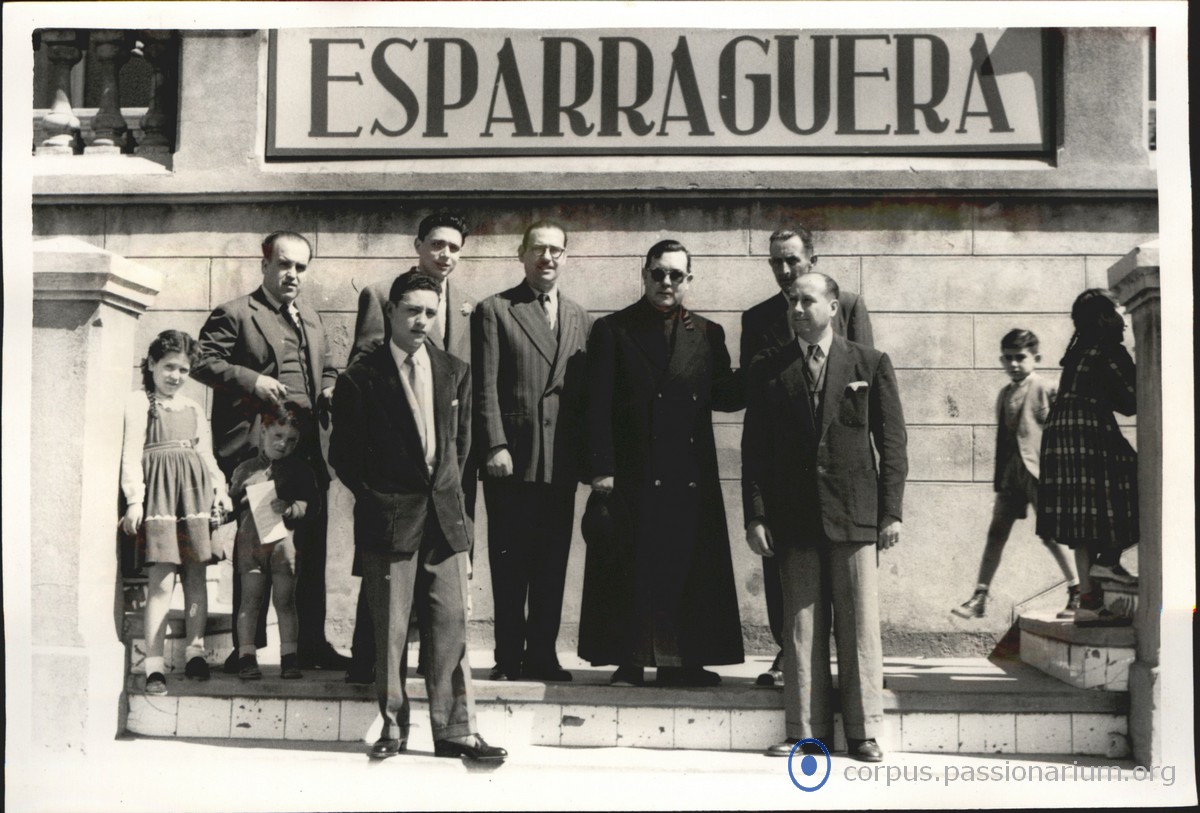